These muffin tin cinnamon roll apple pies are only 2 ingredients and so easy to make.

From the recipe collection of Tara Ippolito

These muffin tin cinnamon roll apple pies are so cute and you only need 2 ingredients to make them.

I know it’s crazy to think that these adorable little pies are only 2 ingredients but believe me, it’s happening.

Pretty incredible what a package of canned cinnamon rolls, some apple pie filling and a muffin tin can do.

As someone who’s an admitted horrible baker, I live for shortcut desserts like this one.

Minimal effort with maximum results and only 2 ingredients!

It just doesn’t get easiest to make than that. And I absolutely love the way they look, too.

I mean, anything made in a muffin tin is destined for cuteness.

These pies were such a huge hit at my house.

You’ll love them too if you give them a try. I just know it.

And speaking of desserts you’d love. Here are a couple super simple and delicious dessert recipes for you to try next:

Yes this recipe is technically for apple pies but that’s no reason not to branch out.

This is really just a concept so switch out any kind of pie filling you’d like.

They’d all work together very nicely with the cinnamon roll crust.

I really drove home that these cinnamon roll apple pies were only 2 ingredients.

That’s a huge selling point for this recipe I think.

There are a few things you can add to jazz these up a little though if you’re in the mood.

Here are a few ideas for toppings:

Use your imagination! Whatever you think would be delicious and suit your own taste, go for it.

Then, open the pillsbury cinnamon rolls and separate them into their 8 individual servings.

Save the glaze that comes in the can and place it on the side.

Now using your fingers, press down and spread each cinnamon roll flat.

Next place them individually into each cup of the muffin tin.

After that, use your fingers to press down and push the cinnamon rolls against the bottom and up the side of the muffin tin.

Now place a little of the apple pie filling into the center of the cinnamon rolls.  

I did about two slices of apples in each one.

Next let them cool slightly in the muffin tin. For about 5 minutes.  

Using a fork, carefully remove them and place them on a wire rack to cook for another couple of minutes.

Now this is optional but If you have a little cinnamon on hand, sprinkle some on top of the apples now.

If not you can totally omit it.

Finally, microwave that glaze for about 10’seconds or until it’s nice and smooth.

Pour it over the cinnamon roll apple pies and you’re done!

Transfer them to a serving platter, serve warm and enjoy!

I go this recipe straight from the Pillsbury website here is the link if you’d like to check that out yourself.

Tara Ippolito is a self taught home cook from New Jersey and cookbook author of Fast, Simple, Delicious. Better known as “T” across social media, she makes easy to follow recipes using familiar ingredients. T uses her Tik Tok, Instagram, Facebook, YouTube and Pinterest channels to share recipes and cooking tips for everyday people. Her motivation to share with her followers is simple. To inspire people to cook and become more comfortable in the kitchen.

As a wife and busy mother of two little boys she she’s always cooking fast family friendly meals. Sharing her kitchen with others that want to learn is a true passion of hers. As her social media platforms continue to grow she is committed to delivering consistently delicious content to her followers.

Hello there! My name is T & I’m a home cook from New Jersey. I love to share easy to make recipes, cooking tips & kitchen hacks with people who love to cook like I do. My recipes are all easy to follow & use ingredients most people are familiar with. Being a busy stay at home mother of two, I have to cook delicious budget friendly meals that are fast to make. I hope you find something helpful here. Thanks for coming by.

This site uses Akismet to reduce spam. Learn how your comment data is processed. 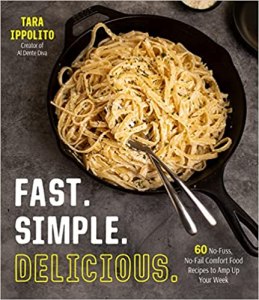 Expensive ingredients, long shopping lists, convenience over quality: recipes weren’t always this complicated and disappointing―and they don’t have to be anymore. If you’re craving a cookbook that’ll put the “easy” back into “weeknight cooking,” then let Tara Ippolito teach you the right way to do dinnertime.